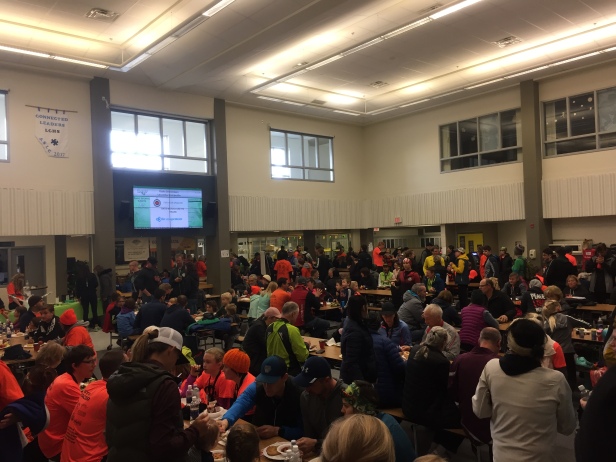 Hello. This was my first year running Bill’s Trail Run. The race was celebrating it’s 5th anniversary and was setup both to honour it’s namesake, Bill Nielsen, and to support local trail upkeep. Bill Nielsen was a runner who carved out and built and maintained many miles of trails in Lacombe. He completed more than 100 marathons, including more than 30 with Parkinson’s disease and passed away in 2014, at the age of 73 with Pancreatic cancer.

The event offers a family 2K, a 5K, a 10K, and Bill’s Special 10 miler. Since I was headed off to the event by myself, and I was always told that you get the most distance for your money by doing the longest distance, I signed up for Bill’s Special.

I picked up my race shirt and bib the morning of. The race was headquartered at the Lacombe High School. It was a cool morning and there were a lot of people wearing pants. I decided to stick with shorts but wore a long sleeve shirt under my bright orange BTR shirt. We stayed in the school until the 10 minute warning and then the 10milers headed outside for the pre-race instructions. I was getting all set and then heard, “no headphones”. Oops, I tucked my headphones away in my pocket. This was my first time running without music in awhile.

I had not studied the course map and was not familiar with the trails so I was not sure what to expect. We started out running down residential streets and then turned a corner onto a wide dirt path. The ground was solid and easy to run on with regular street shoes. It was fairly level with few elevation changes. We ran through the trees which were changing colours in the fall and made for a nice scenic run. We ran past several lakes and ponds. It was a good thing that I was not wearing headphones because I needed to hear the course marshals directing traffic. The course was not straight and without directions you could easily get lost. All rocks and roots that you could trip on were painted bright orange.

There were a few hills mixed in and I walked up 2 steep ones, but they were not long and did not slow me down overly. The folks on course were all friendly and encouraging. I carried a hand water bottle with me but there were also a few water stations setup along the way.

At the finish, Bill’s wife presented me with my medal and I went into the school to warm up. They had several options for food after the race. You could have Chili, Veggie Chowder, or Pizza. I grabbed a slice of pizza and a donut and a juice box. They staggered the start times of the events so that everyone would be finishing together. While there were only 45 people running the 10 miler, there was 400 participants in total. Along with all the families and volunteers, it was a packed house. The race was a great success as told by the smiles all around.

They thanked me via email for participating and even sent a link to free race pictures. Thank you Marlene for getting a shot of me rounding a bend on a street between trails. I forgot to get a post race photo so this is the only shot I have of me here. 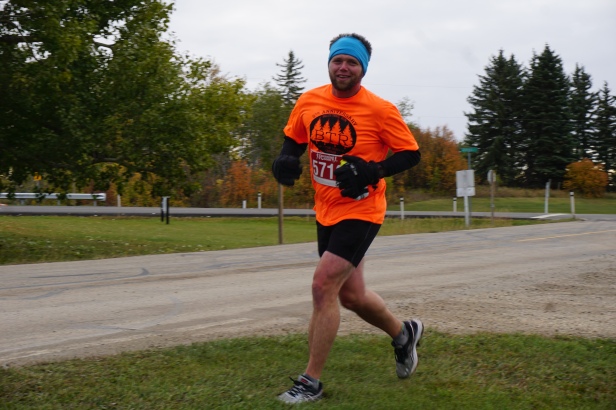