We got to the Las Vegas Convention Centre on Friday to pickup our race packages. The Rock ‘n’ Roll team is always very organized and there was no exception here. The lines were quick, we got our bibs and shirts, and were straight into the expo.

This is the largest running expo going with tons of vendors and plenty of free samples. We stocked up gels and blocks and beans and spent 2 hours going to check out booths.

Both my wife and I were running the 5K on Saturday and then my wife was doing her first half marathon on Sunday and I was doing my first full marathon. We planned our hotel to be near the finish line on Sunday so we stayed at the Flamingo. Two years ago I did the half and my wife did the 10K and taking the monorail and walking a long way after the race back to the Excalibur was not ideal.

Given the tragic event on Oct 1, 2017, this years race had a different tone. Tons of people wanted to show their support of those impacted and Rock ‘n’ Roll made great strides to help us do so. There was a Vegas Strong wall banner at the expo that everyone had the opportunity to sign and they sold Vegas Strong shirts with 100% of the proceeds going to the victims fund. Thank you Rock ‘n’ Roll Marathon for honouring those that were lost or injured and the families affected.

The 5K race was at the Las Vegas Festival Grounds just across from the SLS. We took the monorail to the SLS and walked over to the grounds. Security was tight. We had no problems and were grateful for the security and volunteers who just wanted to make sure that we were safe while we had fun. While getting ready for the 5K, the band March Forth played. They are from Portland and as my wife described them, they are like a marching band on acid, complete with a stilt walker and acrobatics. They brought a great energy to the event. I had not heard of them before but am now telling everyone to check them out.

Before the 5K my wife and I decided to run together. I told my wife that I would stick with her at whatever pace she wanted and she asked me what my marathon pace was going to be. I told her and she said, “Why don’t we just run your marathon pace”. So, we did. We ran with the glow sticks that they were handing out on the grounds. The 5K had young and old, sprinters and walkers. It was a true party atmosphere; possibly the funnest 5K that I have ever done. We held my marathon pace for the most part and my wife set a new 5K personal best.

After the race we grabbed water, a free beer, and snacks and found a spot to settle in for the headline concert. 2 years ago the headliner was before I ran the half and my wife missed it because the 10K has a different start location. This year we got to enjoy it together. Also, it is easier to enjoy a concert when you are not worrying about prepping right for your race. The headliner this year was the Goo Goo Dolls and they did not disappoint. They played some newer tracks but still played the 90’s hits for their fans. We had a good time and then took the monorail back to the hotel. 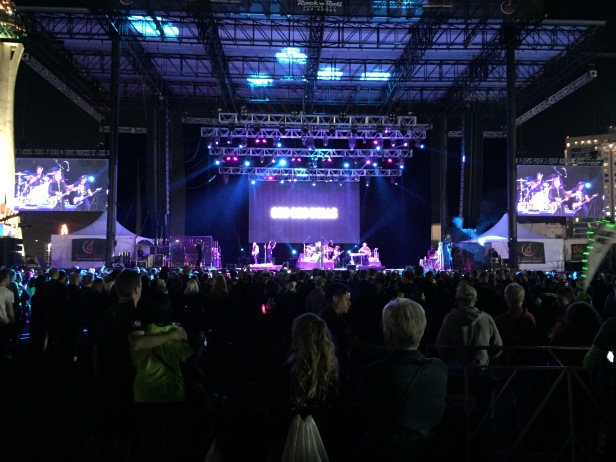 Sunday; Race Day! Well, the big day had finally come. Months of preparation and training was leading to this day. We had breakfast and then went to the gym/spa at the Flamingo to stretch and relax. I went into the hot tub for a bit and then laid down in the stream room. Had a shower and laid down before getting all geared up. I took time to think about my late night training runs and my fuelling strategy. My wife and I studied the route map and planned our runs. I planned out my fuel by kilometre marks: 7K – Gel, 13K – Energy Beans, 19K – Gel, 26K -Blocks, 32K – Gel, and 36K – Smaller pack of Energy Beans. I wrote my plan on my arm, got our bibs on, filled water bottles, and packed our fuels. Got our watches, phones, and headphones. We were all set.

We took the monorail to the MGM and walked over to New York, New York. The pre-race village was setup outside the new home of the NHL Vegas Knights hockey area. We hit the port-o-potty farm and then found a spot to do our pre-race stretching. The police presence was high. It was amazing to know that our safety was the top priority of the event. I thanked more law enforcement officers in one day than I have ever done in my whole life.

When the time came, I walked my wife to her corral and wished her a great race and then made my way to my corral. To cut down on corral jumpers this year, they colour coded the corrals into different sections. I love this! 2 years ago I ran a half marathon obstacle course passing thousands of runners who were not starting in their designated corrals. The corral system is designed so that we can all enjoy the day. If you go up to the front, you are disrespecting all of the runners that you just stood in front of. If your bib says corral 11, do not go to corral 3. This is just rude. Most runners are too polite to tell you to your face (me included) but we hate this. It is a big enough crowd already without you making hundreds of people pass you because you don’t want to stand around waiting as long. Anyway…

I got to my corral and talked to those around me. I met a man from Maine and one guy from Toronto, Ontario who was renewing his vows at the run through wedding on the half course. We listened to the pre-race announcements and then were the pyrotechnics and the countdown. I got my watch and music ready and we were off. The course started going south from New York toward the welcome to Vegas sign. The pedways over the road were packed with spectators. A lot of people were starting on a quick pace and passing me. I kept looking at my watch to make sure that I was holding my planned pace. We went past the welcome sign and there was a string quartet playing. After we turned back north there was the Vegas Strong honour wall. I took a moment and took a picture. I continued north and once we reached the MGM Grand, the sidewalks were lined with cheering spectators. I ran down the right side and held out my hand. I am sure that I gave more than 100 high fives by the time I reached the 5 mile mark passing the Flamingo. I took a look at my watch here and I was right on pace and was feeling good.

By the time we got to the Wynn we hit the third water station. The water stations were very long, giving plenty of room to get by and get water, despite the large field of runners. I coasted on auto pilot all the way to Freemont Street and stopped for a moment to take another picture. 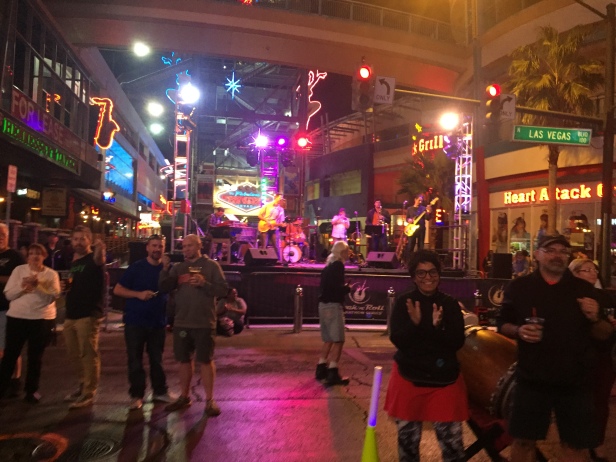 The course split for the full and half marathon was very well marked and just before the 11 mile mark I turned right and the pack got a whole lot smaller. I was feeling very proud of myself now. It set in right here; I am running a marathon! I have done 19 half marathons but today I am doing double duty. Just then I saw the leaders coming back toward me. The guy in first place had a minute lead on second and third who were close together. A few minutes later I saw the top female runner. They were all looking strong.

I was still sticking to my nutrition plan and took my second gel when I hit 19K. I took a selfie at the 13 mile marker and one lady watching started laughing at my very brief pause to snap my picture. I smiled at her and gave a thumbs up and kept running.

What’s this! A hill! I was not expecting this. There was a good uphill as we went under the freeway and then came the longest part of the course. I had studied the map before the race but running it is much different. I got a little disoriented and thought that we were running in a spiral. At one point I saw 6 different running lanes at the same time. This section was mentally tough and it was in the midst of this that I started to sing out loud. I picked all songs that I knew well for my playlist and singing was helping me keep my pace and not think about things like: Does my foot hurt?, my hands are so sticky from slopping Gatorade on them, will my phone be ok in my super sweaty shorts. After mile 18 we left this maze and I shouted out in pure joy. Then I took another selfie at the mile 19 marker. Right around here I got a strange groin cramp. This was a new sensation that I have never felt before and it was not pleasant. 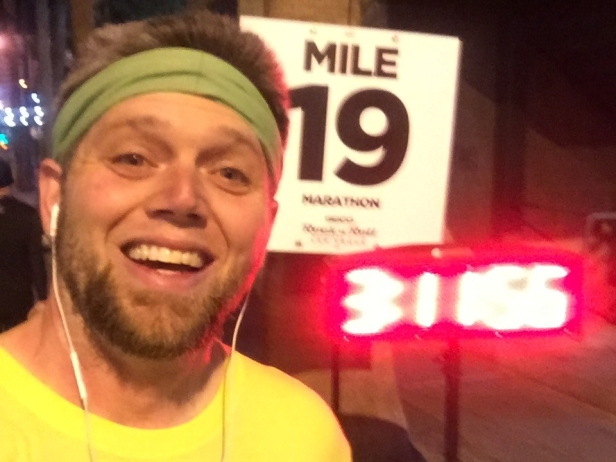 Just as the groin pain dissipated, Boom! A Charlie Horse in my right hamstring. I cried out in pain and started limping, but kept running and in half a mile I was completely pain free again. We got parallel to the half runners again and I thought, good, in the home stretch now. Nope! Just before the 21 mile marker we veered away again and into the fair grounds where the 5K was the night before. Into another 2.5 mile maze. It is a good thing that the course is so well marked because it was awfully dark here. For some reason I was feeling great. I was singing out loud and passing a few people. I saw someone wearing a Calgary Marathon shirt and I shouted, “You got this Canada”, as I passed him.

My pace was still right on schedule. I developed a routine now for the water stations. Throw Gatorade in my mouth, throw water at my head, and drink one water. All without slowing down. Back along side the half marathoners I was feeling strong. One last out and back and we were into the final mile.

I had followed my plan. Ran a consistent pace from start to finish and even ran an extra few meters after the finish line to stop my watch on an even 42.9km. I am sure the extra distance was from my not keeping a straight line and veering side-to-side while taking pictures. I earned my medal. Now walking was very slow. My wife had already finished her race and had a shower and came back to meet me as I left the finish area with my water and Gatorade. We congratulated each other and then I picked up my remix medal and my marathon finisher jacket and then hobbled up to our hotel room.

What a great event. We do one Rock ‘n’ Roll runcation each year and it is always awesome. Not sure about next years destination yet but I know that it will be amazing. Huge thank you to Vegas law enforcement and all the volunteers and spectators for making my first marathon so magical.

What’s next? ULTRA! Since I conquered a marathon, and am always looking for a challenge, I am now training for the Winter Canadian River Valley Revenge 50K trail run in Edmonton in January 2018. Totally different pacing and training, but I can’t wait. Bring on the snowy and icy hills.