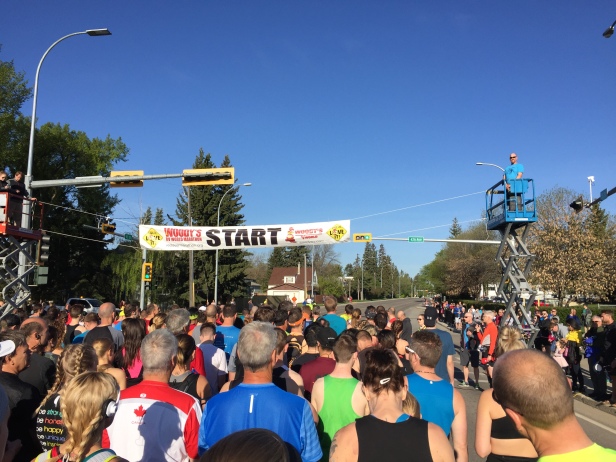 The expo was held the day before the race and we picked up our race packages in the school gym. Running Room was on site and I bought my gels for the race and my wife got a great discount on a new pair of shoes. The shirts this year were the same lightweight bamboo material as last year. This year they were orange for the half and kids and gray for the 10K. I am not sure but think the full was also orange.

Well, this year we had much better weather than last year. Last year it rained the entire race; this year, nothing but sunshine! Woody’s RV World Marathon, aka Red Deer’s River Run, is one of the premiere races of the year in Alberta, Canada. Nearly 1200 participants took part in either the 10K (518), Half Marathon (510), Marathon (133), and kids 1K. My wife did the 10K, my kids the 1K, and I did the Half. This is my review of the Half Marathon.

The race started at Camille J. LeRouge school. The 10K started first, followed by a joint marathon and half marathon start 15min after. The course started over to the river down city streets until we reached the trail system of paved paths and then headed north to McKenzie Trails. After a quick loop here, we headed back south. I was feeling good off the start and was determined to make this race my first sub 2 hour half of the year. Last year I had my first ever sub 2 hour race here. We reached the first water station just past the 2km mark. The course had plenty of support and cheering families and friends holding signs. Many strangers even cheered me on thanks to the customized bibs with our names on them. This is always a fun perk. I took my first gel at the 5K mark.

There were 2 more water stations close together at the 7K and 9K marks and each station had both water and GU drink. I was still running at my desired pace through these stations and was on track for my 2 hour goal. Then we hit a steep hill heading up towards Heritage Ranch. I leaned into it, kept up on the balls of my feet, and got my arms into motion propelling me up the hill. I hit the top of the hill worn down but knowing that a long downhill was coming, I held my pace. There was another water station that I took advantage of at Heritage Ranch and then we ran over a little bridge and got to my favourite part of the course. A winding gentle downhill for nearly a kilometre. Oh, the sweet feeling of a long downhill right in the middle of the course sure makes you feel good heading into the second half.

The course headed down to Mitchell Pond (formerly Waskasoo Park Pond) and over a small bridge and then did a lap around the small island. This was depicted on last years medals. This is a very scenic part of the course with lots of people fishing in the pond. There is a dirt path around the island and then we back tracked over to the path system. The course is well marked but it was right here that their was one opportunity to get lost. There is a fork in the path right past a blind corner and I had to look around closely. All was well, I saw the route marker and headed right. The path crossed the river to the north side over a large pedestrian bridge and then it was a straight shot for Bower Ponds with another water station on the way. I grabbed a cup of water from the first volunteer and dumped it over my head and then grabbed a GU drink from the last volunteer and tossed it toward my mouth. I was heating up and took my second gel right before the water station.

I was pushing to stay on pace as we rounded Bower Ponds and the 16K mark and attempted to smile for the camera (left picture below). Then we passed a band playing live rock music under a bridge and headed for the iconic train bridge. We crossed the old train bridge, turned pedestrian bridge, and I smiled for another camera (right picture below). I knew the photographer here and gave her a big sticky high five as I went by. My hand was sticky from the GU drink that I splashed on my hand at the previous water station. She didn’t mind, she cheered me on and I pushed forward.

We passed yet another water station around 18K and then said goodbye to the full marathoners at the 19K mark. They headed left (north) to lap around River Bend Golf Course and us halfers aimed for the finish. We came up behind Lindsay Thurber High School and then powered up a steep climb in the final kilometer. I kept a watchful eye on my watch and knew that if I slowed down at all, I would miss my goal. Pain is temporary, but if I missed my goal by 30 seconds, it would haunt me for weeks. After running uphill, was the sweet reward of downhill. I turned on the jets and sprinted the final 400 meters and came across the finish at 1:59:13! They put my medal on me and handed me a bottle of water and I found a spot on the grass to lay down. 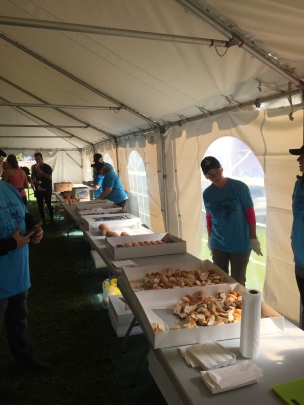 I celebrated the race with my family and then hit the post race refreshments. They had water, juice, donuts, bagels, bananas, oranges, and a grill cooking up fresh egg and sausage sandwiches on English muffins. They sure take care of runners in Red Deer.

Next was the kids race. They did a lap around the track at Thurber and then headed for the same finish line that the rest of the runners use. They were coming in just as some of the marathoners were trickling in. The kids had their own medals too. Then we got a free group picture at the Twitchy Booth and called it a day. 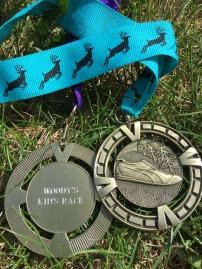 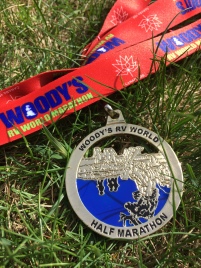 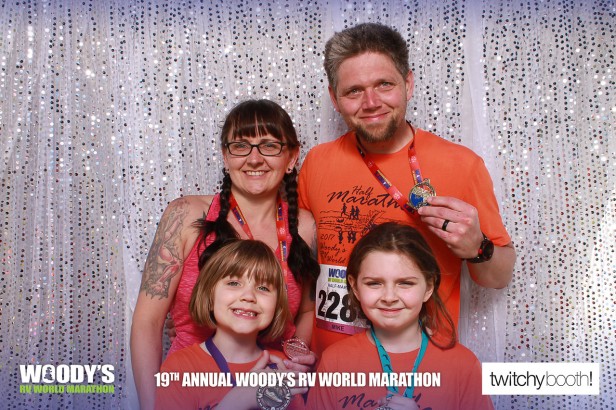 Always fun to run in Red Deer. Great scenic and fast course, lots of perks, and lots of friends and family. See you next year!