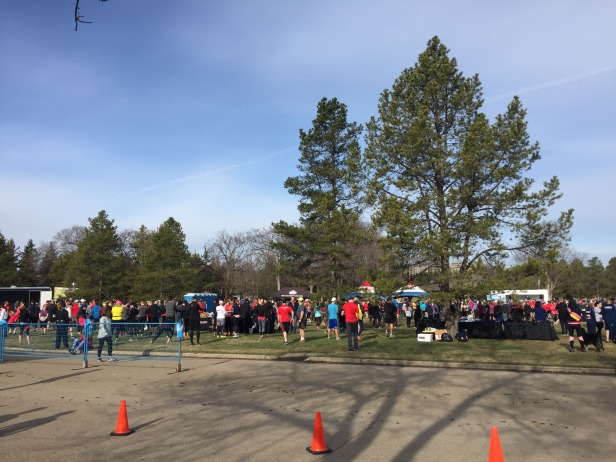 Back for another year! This year there were more than 1000 participants taking part in the 1K, 5K, 10K, and Half Marathon races. My kids ran the 1K, my wife the 5K, and I ran the half marathon. The course start/finish area were slightly changed from last year because of the long wet winter. The weather this year was considerably nicer than last year. 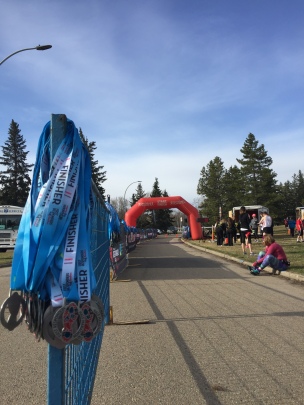 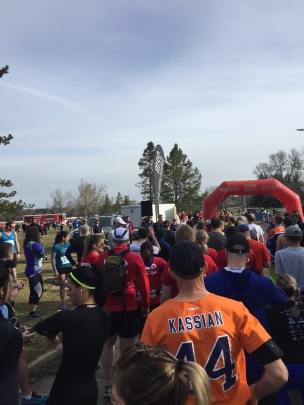 The race started with a steep climb up the hill from Hawrelak Park toward the University of Alberta. At the top of the hill we proceeded toward the Cross Cancer Institute along the residential and reached the 5K turnaround and first water station. We then proceeded along the paved paths on the south side of the North Saskatchewan River. There were several small hills along the way and we headed toward Fort Edmonton Park. Somewhere around here we passed the 10K turnaround. Staying on the paths behind Fort Edmonton we ran through the woods, up and down hills and then reached a turnaround point. From here we ran back to the Whitemud and up the hill to the shiny silver balls. We crossed the bridge and down the switchbacks towards the Edmonton Valley Zoo. I was already feeling the effects at this point of not fueling properly and knowing that the largest hill of the course was still too come, I pushed harder here past Laurier Park as I planned to walk up the large hill.

Just as we got to the Zoo parking lot, I saw my nemesis, the hill that drivers take to get down to the zoo. I ran to the base of the hill and then started my long stride walk. I got passed by a handful of people on this hill, but I know if I pushed too hard here I would end up walking over the finish. As I reached the top of the hill, we hit the 12K mark and I went for my Power Gel. I got back into my rhythm but at a slower than intended pace. My body did not want to get back to race pace. We weaved around in some residential and hit another 2 water stations on the north side of the river. This part of the course was longer than I remembered from last year. I feel like I had only visualized the first half of the course, and then the final 2 kilometres, but forgot about 7K in the middle.

We finally reached the part that I remembered next from last year, a nice gradual downhill into the river valley. Then I looked ahead and realized that we were still a good distance from the Groat Road Bridge. I thumped along down the path and passed one more water station I think before getting to the underpass. We looped around and up onto the east side of the bridge and ran back toward Hawrelak Park. That sweet finish line would soon be here. Up another hill and then we made a dash for the park.

Because of the route change this year, we entered the park and could see the finish line, 400m away, but we had to run all the way around the park, another 2K, and enter the finish line from the other side. It is always such a tease to see a finish and know that you cannot run straight toward it. That last 2K was soooo long. As I rounded the final bend and saw the arch I gave everything I had left. Grabbed my medal, stopped my watch and found a spot on the grass near the water jugs to lay down.

Last year they had water bottles at the finish but had ran out before I got there. This year they had large barrels with spouts and disposable cups. Thankfully there was plenty of water for me this year. I met up with the family and we grabbed some free Fat Franks hot dogs and a pop. They had 2 food trucks to pick from for your post race food; Fat Franks and the Lemongrass Grill. There was also the usual supply of bananas waiting. 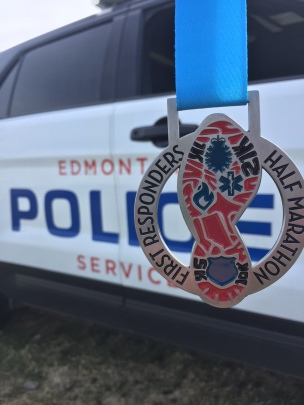 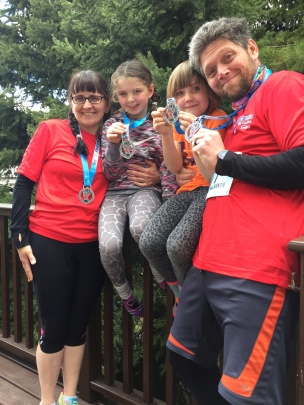 This course is a tough one. I didn’t beat my time from last year and at the finish I thought to myself, I will not be doing this again next year. But, one day later, I am now saying to myself, I am not done with this course. I do not feel that I have beat it yet. So, I will be back next year, more focused.