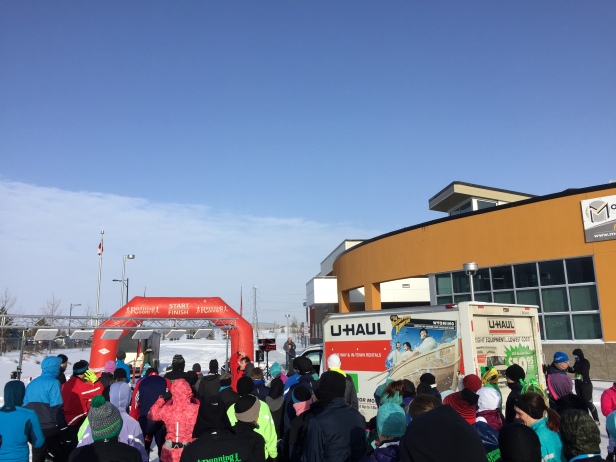 This was the 25th annual running of this event in Edmonton and my second year running. The location was different this year and so was the weather. Instead of starting at Fort Edmonton Park, we started near the Terwillegar Rec Centre at Mother Margaret Mary school. Instead of a wet spring day, it was a full on winter race. We learned afterward that at minus 20 degrees Celsius with wind, this was the coldest ever running of this event. But the cold weather did not stop a great turn out.

We had access to the school before the race to keep warm and stretch and the starting/finish line was right outside the door. The course was a straight out and back and offered 5K and 10K distances. I ran the 10K and my wife did the 5K. The 10K walkers started first. It was just a small group and they were given a 30minute so there were no congestion problems. Then it was time for the 10K runners to begin. There were 138 participants in the 10K run. We got the count down, I started my watch, and we were off.

It had snowed for 2 days leading up to the race and the course was not cleared. We started through some deep stuff, above the ankle and I was feeling strong and held a normal pace. We crossed a pedestrian bridge and were making our way over to the river valley when I passed the first water station. Right here there was a prolonged downhill and I was going dangerously fast for the slippery conditions. I tried to slow down because I did not want to fall but as my watch beeped at the 2K mark, I had just set my fastest 1K ever.

Having reached the river valley, the course got thinner. There was just a single path in the middle of the trail where the snow was matted down and the trail was otherwise covered with fresh snow. I passed the 5K turnaround and at this point could see no one behind me and only caught glimpses of the person ahead of me when I crested a hill or went around a bend. These quiet peaceful moments, running alone in nature are rare during a race and I was just enjoying it. The course got even skinnier and became single track in the woods.

We came out of the woods near a parking lot where the 10K turnaround and water station were located. I had been counting the leaders as they came back toward me and it looked like I was in 10th place. I took water and kept pushing forward. Their was a large group of people just 500m or so behind me and I wanted to keep them there. The course had been more downhill on the way out and now was time to work the uphills. I got passed by one person on the steepest incline. I ate some Power Jelly Beans and ran strong from there on out and nearly caught the no 10 runner. The course finished at 9.5K on my watch and I was 20 seconds back of 10th place and finished in 11th overall, 3rd in my division. I was very happy with my effort and my results. 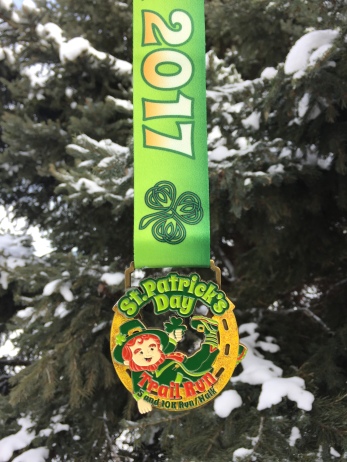 I got my medal and I met up with my wife who had started 15min behind me with the 5K runners. The 5K had 80 runners and they were followed by the 5K walkers. In total, about 300 people came out. Afterwards, we headed into the school gym for hot pulled pork sandwiches, bananas, coffee, Gatorade, cookies, and salad. This was a big improvement over last years pancakes.

To summarize, we had a lot of fun. These Running Room races are always very well organized (Thank you Justin!). The course was well marked and there were volunteer course marshalls standing in the cold in the snow at every fork in the trail to make sure that no one went off course.

See you next year, hopefully it will be a little bit warmer!