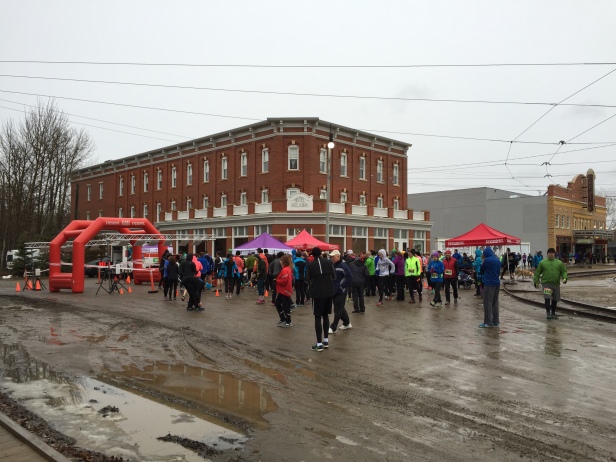 It was a wet, muddy, and windy morning at Fort Edmonton Park today for the 2016 St. Patrick’s Day Trail Run this morning. The event offered a 5K or 10K and had runners and walkers for both distances. My wife ran the 5K and I completed the 10K.

We arrived 30 minutes before race time and all runners gathered in the Hanger, an old airplane hanger that has been refurbished into a really nice hall. They had water and coffee and plenty of room for everyone to sit inside out of the cold.

There were 569 participants in total but the trails were not crowded and I didn’t have to do any dodging around people. The course started north away from Fort Edmonton Park and went up the hill past the silver balls and over the whitemud bridge. We continued down toward Laurier Park and hit the 5K turnaround and water station. Then the path proceeded past a dog park and onto a walking bridge where the 10K turnaround was located. At the 10K turnaround they had both water and Gatorade.

It was a straight shot, out and back. There were the 2 good hills, regardless whether you did the 5K or 10K, and other than that the course was pretty much flat. It had both rained and snowed in the morning so there were some sloppy sections on the course but there were plenty of race volunteers keeping an eye on and cheering on the runners.

I really pushed for the last 2km and set a new personal best for the 10K. This was a very well organized event and it contained all of the big 4 that I look for in a race. 1) Finisher’s Medal, 2) Chip Timing, 3) Free T-Shirt, 4) Post race food.

The medal is quite heavy and the ribbon is printed with the race name and year. I really love the medals that go the extra distance and also have a great ribbon. This ribbon is much like the Hypothermic Half ribbon, which has the same race director.

The post race meal had pancakes, scrambled eggs, and hash browns. Coffee and water were also served. While not the feast that the Hypothermic Half had, the food was still good and much appreciated.

To some up, this was a great March run. Well organized and raised money for the Youth Empowerment & Support Services (YESS). I got everything I wanted. I great morning spent with runners, a well organized race, a medal, food, and a positive feeling that we helped a good cause. This race is going to be an annual event for me for sure!